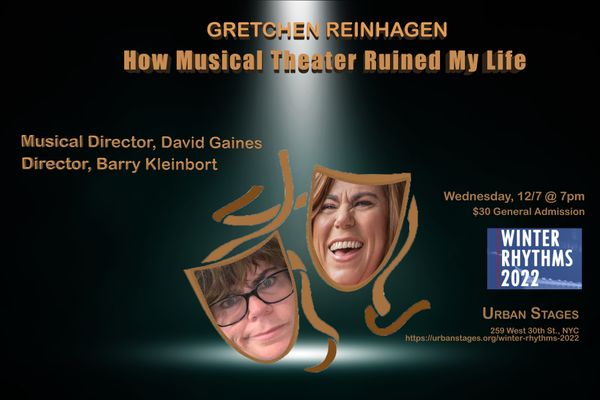 Multi-Award-winning Singer, Actress, Comedienne Gretchen Reinhagen brings her brand-new Musical Theater themed show to Urban Stages, with longtime friend and teaching partner David Gaines at the piano, for a special 1-night-in-NYC-only performance. Growing up in a musical theater world, Gretchen revisits some of her favorite shows, favorite roles and favorite songs, both past and present. While the theater didn't really ruin her life, she was a fairly gullible kid who desperately wanted to believe that the sun would come out tomorrow, many a new day would come, and you wouldn't be arrested for loitering on the street where she lived. She was also the kid who rooted for Oklahoma's Jud to get the girl and was convinced she was just a bagel on a plateful of onion rolls. This show is packed with the music that Broadways fans love, the songs that Gretchen's voice loves to sing, and, as always, Gretchen's special brand of "The Universe keeps trying to give me material" comedy.  Directed by Barry Kleinbort (who also gets the credit, or blame, for the title!)